We use a market leading Positive Input Ventilation system specifically designed to reduce the humidity and therefore eradicate condensation and mould from your property.

The Nuaire Drimaster is designed for properties with loft spaces. Once installed, it draws warmer, drier, tempered and filtered air from the loft space and dilutes, displaces and replaces all the wet, damp air that is causing problems in the property. The fan speed is adjusted to suit the size of your property to create approximately twenty air volume changes a day.

The benefits are exceptionally low running costs, reduced radon levels and reduced allergen levels. Being hard-wired into a dedicated, un-switched, fused spur, with a built-in thermostat, it runs completely automatically and a tenant can’t easily turn it off!

We were called out by Mrs Jones in Lanner, Redruth who had excessively high levels of condensation and mould in her detached 3 bedroom stone-built house. Whenever Mrs Jones used her cooker, the wall tiles literally ran with condensation and the staircase wall looked like a waterfall! She was using dehumidifiers almost continuously and builders had suggested re-pointing, re-plastering and installing a new damp proof course. Instead we fitted a Drimaster and replaced her broken cooker hood extractor fan.

Just one weekend later, she realised that there was no more condensation on her tiles and the air smelled fresher and cleaner. Her clothes have stopped going mouldy and the house feels much warmer. She is delighted with her installation and would have happily paid a lot more to solve her condensation issues.

During the free survey we measure the humidity level to determine the extent of the problem. We need to rule out physical problems such as rising damp, penetrating damp, leaking roof, faulty chimney flashing, plumbing problems, etc, etc. Then we examine the effectiveness of any kitchen and bathroom extractors, window trickle vents, soffit vents, etc. We also inspect the property to establish the suitability, and the optimum location, for the installation and venting of a Drimaster. We will bring a working Drimaster for you to examine, so you can hear just how quiet it is and to feel how effective the fan is. We will confirm the price including any extra works that may need carrying out, such as additional forced extraction, ducting, etc. We will be delighted to answer any queries you may have about the system and how it will benefit you. 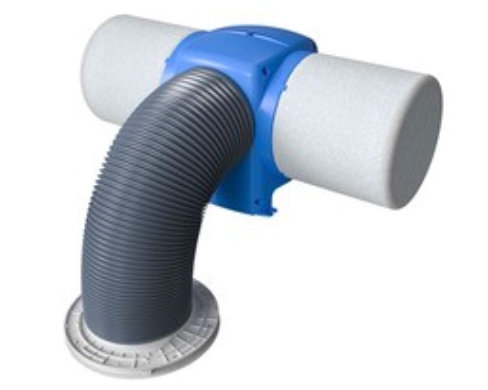 Once you have decided to go ahead, we will revisit the property, install the system (this usually takes 2-3 hours including leaving everything clean and tidy), set the correct fan level for the size of dwelling and let you enjoy all the benefits a reduced humidity level will bring.

Within a few days you will see a measurable reduction in condensation levels and no more black mould!

Shortly after installation, our fully qualified electrician will inspect the new fused spur, check the altered wiring circuit back to the consumer unit and issue an "electrical minor works" certificate - this inspection and certification is included in the quoted price.

We guarantee that if, within one month of installation, the system is not working to your full satisfaction we will remove it (leaving the blocked-off ceiling diffuser in place) and refund your money in full. The system also comes with a 5 year (one year parts & labour plus four years parts only) manufactures guarantee.

The system is extremely energy efficient, using a six speed fan that, even on full power, uses only 16 watts of electricity per hour. The fan is powerful enough to ventilate a five bedroom house but will be set for optimum performance in your property.

Installed in a typical two bedroom size house, the running costs will be in the region of 20p per week. Whenever the loft temperature gets above 23°C the system automatically switches itself off, as condensation is not a problem at those warmer temperatures. In sunny Cornwall in the late spring, summer and early autumn the running costs are therefore even less!

With such low running costs, occupiers hardly notice the Drimaster is even there - apart from the vastly improved air quality and the lack of any mould!